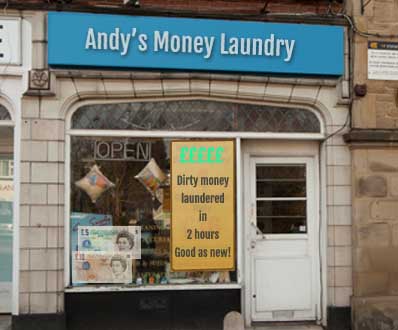 A team of anti-fraud officers raided a Leeds shop at dawn this morning, following an underworld tip-off that the premises were being used to launder money.

Fourteen officers in full riot gear, accompanied by a German Shepherd attack dog, smashed down the door of Andy’s Money Laundry in Castle Street and seized £15 in used banknotes.

Alfie Ramsbotham watched the raid from his milk float and told Spoofflé what happened. ‘Ooh heck, it were like a movie it were,’ he said. ‘They was chucking them stunt grenades through window like, ooh it were proper exciting.’

We sent Brenda Eckerslike, Spoofflé’s Northern Crime correspondent to investigate. She arrived just as the owner of the shop, Andy Sterling, was being led away in handcuffs but managed to get a little information from him before the duct tape went on. Mr Sterling claims that he provides a much needed service to the Leeds community by dry cleaning and ironing their dirty banknotes, a business started by his grandfather in 1910 when the customers were mainly coal miners.

Brenda spoke to the senior officer who led the raid but who declined to provide his name, saying that he was known as ‘217’. ‘Money laundering is a growing and extremely serious crime,’ said 217, ‘which, as you have witnessed this morning in an operation we’ve planned in minute detail for six months, we will stamp out.’