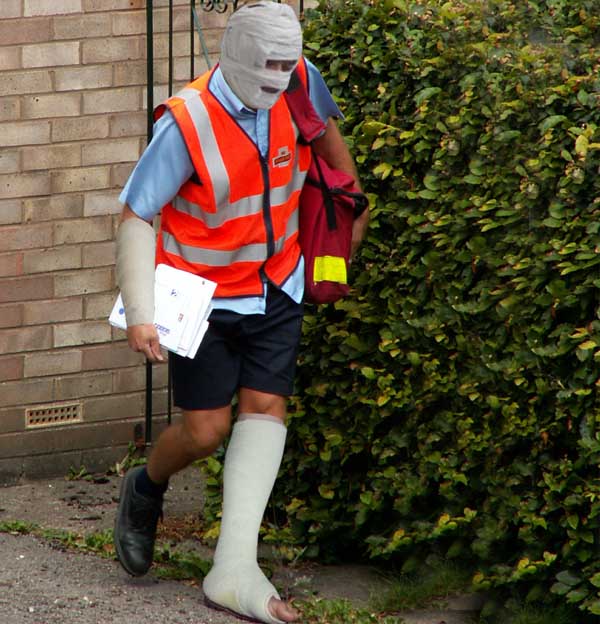 Postal workers have been warned to be on their guard after a Hastings postman was savaged by a pet budgerigar when he tried to deliver an Amazon package.

46 year old Jack Cooke is used to dealing with ferocious dogs but nothing prepared him for the vicious attack he faced last week.

“I was just handing a parcel to the lady,” said Mr Cooke, “when this mad bird flies at me, shrieking. She tried to pull it off but it was no good, by then it had me on the ground, slashing with its talons and snapping three bones in my arm and leg with those huge wings. It was horrible, a nightmare.”

The Communication Workers Union tells us that attacks on postmen and women rose by 9 per cent last year to almost 2,500 incidents, an increase they blame on the popularity of on-line shopping.

Health & Safety officer Janet Slippage told us: “This was an especially nasty and sustained incident that could easily have resulted in a fatality.”

The Royal Mail said that “even the most placid animal can be prone to attack if it feels it, or its territory, is being threatened”.

After three days in hospital, Mr Cooke has returned to work but refuses to deliver parcels. “I know I was bloody lucky,” he said. “I hate to think what would have happened if there had been two of them.”