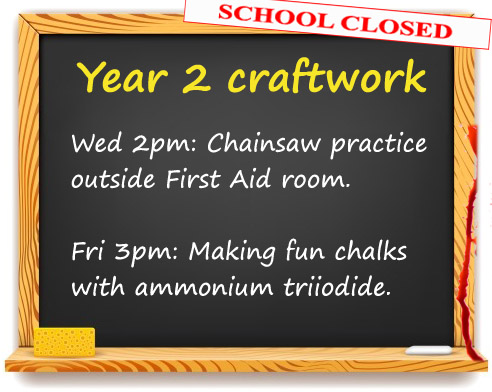 Parents of toddlers at St Winifred’s Primary near Frimley have called for the reinstatement of the school’s controversial Head Teacher following his suspension last week for ‘reckless teaching’.

In a radical appointment, ex-SAS captain Jake Boulder took over the failing school with its 84 pupils last September and quickly turned what had become an academic disaster into an inspirational model with a waiting list of over 100. The local education authority however felt that the disappearance of eleven six-year olds during a hike over the Alps in October was the final straw.

Mr Boulder (37) replaced most of the traditional classroom lessons with a challenging assortment of practical survival activities and says he still doesn’t understand why the school has had to close.

“Yeah, we did lose a few on that trip,” he told us at the nearby cave he lives in, “but they had a bit of Kendal’s mint cake and a compass with them so, you know, they could still turn up.”

In addition to learning how to sharpen and use petrol chainsaws, power drills and angle grinders, pupils from the age of five had quickly become proficient with the Blackhawk 2000 crossbow, handling a variety of firearms and detonating unstable compounds to escape from captivity.

Spoofflé spoke to six-year old Teddy Robinson who was picketing outside the padlocked school with his mother. “It’s not fair, is it?” he said. “I was looking forward to using the Glock 17 pistol in the playground and now I can’t.”