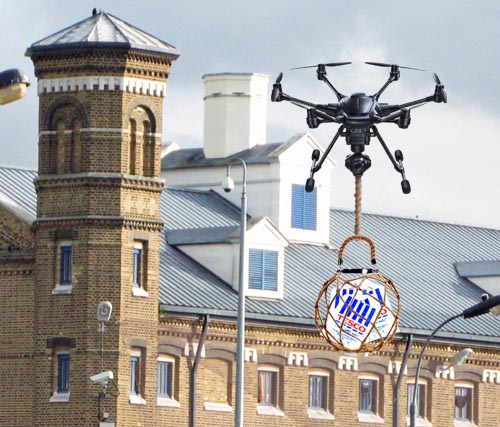 A prisoner in Wormwood Scrubs has cancelled his ‘Drones-2-You’ account with  Tesco after the supplier missed his cell delivery slot for the third time in two months.

Fraudster Ginger Miller (38) said he was sick of the poor service. ‘I mean, it’s not on, is it? First they was forty minutes late, then the next week they was even later and the dope-head drops it at the wrong window then bugger me, Friday night they text to say they ‘aint got no organic Samphire so they’d substituted ‘Tesco’s best’ instead. I said you’re joking mate, you can take it all back.’

Mr Miller’s dissatisfaction with Tesco is shared by several other inmates. Jezza ‘The Blade’ Thorpe says he’d finally had enough when a drone crashed the delivery basket against his window and spilled a tray of ‘Tesco Finest Haddock Risotto’ down the bars. ‘I’ve told ’em a dozen bleedin’ times to leave my order with Mad Frankie Hammer in cell 248 but do they listen? Do they bollocks. Tesco literally ruined my night in, they did.’

Mr Thorpe told Spoofflé: ‘I was all sorted for a sweet night I was. I’d loaned ‘Mary Poppins’ off of one-eyed Pete next door, got a nice 1990 Chateau Haut-Brion breavin’ on the radiator but no bloody risotto to go wiv ’em. Disaster.’

We understand that Mr Miller and Mr Thorpe have now both moved their custom to Ocado who they say has been ‘brilliant’.