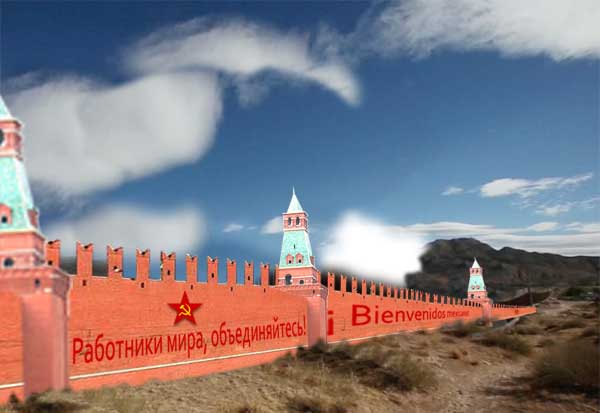 In a gesture that has rocked the White House, President Putin today offered to build Donald Trump’s wall for nothing, as a ‘small token in recognition of all that you have done for Russia.’

The Russian ambassador to the United States, Anatoly Antonov, announced the gift at his 10.00am Press conference. ‘Why not close friends help close friends? Is for us quite normal. This wall for us is not difficult to be making, we have many bricks and the design work well already in Moscow.’

When asked by our Washington correspondent if the offer included any special conditions, Mr Antonov replied: ‘I think not unreasonable ones, like only Russian choice of slogans for walls.’

Spoofflé had earlier received a leaked copy of the plans (which included the artist’s impression shown here) from a mole in the Russian embassy in London. We asked the ambassador if he could explain the purpose of what appear to be missile silos located every 60 miles along the wall. Unfortunately there was no time left for questions and the meeting ended abruptly.

Donald Trump later tweeted: ‘Now we know who REALLY want’s America to be GREAT again! Screw you, Democrats! I WON! Lets GIVE IT UP FOR VLAD FOLKS! Gonna be a beautifull, beautifull WALL!’