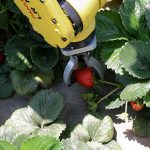 Norfolk fruit farmer Ivan Hayhoe has halted trials of a robot after an employee spotted the machine taking produce for itself.

The Chinese-made ‘Succulent 4000ST’ (list price £245,000) had only been deployed in Mr Hayhoe’s fields for three days when it was seen to be secreting especially large strawberries onto a previously unnoticed shelf immediately below the picking arm. When supervisor Greta Spencer approached the robot, it quickly drew a piece of hessian sacking over the private stash, resumed its standard tuneless whistling output and carried on with its task.

After Ms Spencer had stopped the robot she discovered approximately 60Kg of the plumpest and ripest strawberries hidden in the tray. “I couldn’t believe it,” she said. “You wouldn’t think a machine could be dishonest would you? Not only that, but after I shovelled the fruit out there were five cartons of M&S Extra Double Cream sitting there too!” She was not entirely pleased with the robot. “We’re all on piecework here and this bloody thing is messing up our bonus. If it had a bottom, I’d smack it.”

Scientists from the Cambridge Institute of Artificial Intelligence are travelling to the farm tomorrow morning to perform cognitive behaviour tests. “This is extremely exciting news,” said Susan Poundrell, Emeritus Professor of AI. “This may be the first instance of a robot displaying real intelligence, or as we call it, RI.”