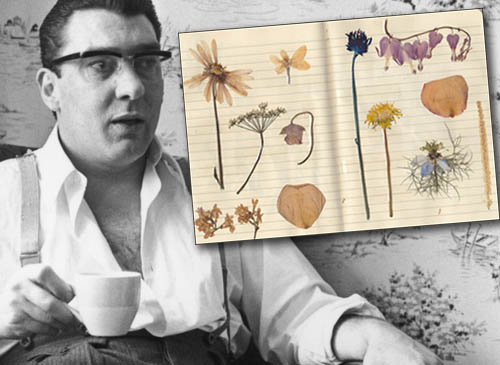 A surprisingly benign side has emerged to the notorious Sixties East End gangland boss Ronnie Kray, as a trunk full of his personal possessions has been discovered in the loft of his childhood home.

The items – including a delicately curated collection of pressed wild flowers – were auctioned yesterday morning at Sotheby’s, fetching £14,000 (£11,200 after commission).

Our Arts Correspondent Trinny Bakewell attended the auction. ‘It was fascinating,’ she said. ‘Obviously the leftie arts world were all there, Melvyn Bragg, Crispin Tudenphatt and his crowd, but also a large group of much older guys with shaved heads and ill-fitting suits.’

Trinny had an opportunity to look through Lot 216, entitled ‘The other Ronnie Kray’ before bidding began. ‘Oh there were all sorts of things, apart from the flowers, which I have to say were the most beautifully arranged specimens I have ever seen. Ronnie had added a little note next to each flower, like “Big red pettle off of the hedge” and “Butercup wot was stuck on Reggie’s boot”.’

The collection also included a ‘Muffin the Mule’ toy with its ears pulled off, ‘Noddy’s first knuckleduster’ (rather worn but in its original box) and what is believed to be the desiccated body of Ronnie’s pet rabbit ‘Fluffy’, clamped in a pair of Molegrips.

The successful buyer, Jack ‘No thumbs’ Nichols’ spoke afterwards to Trinny and confirmed that he knew Ronnie as a young man. ‘Yeah, ‘e could be a little firm wiv people wot crossed ‘im but I never ‘ad no grief from ‘im.’

Asked why he had no thumbs on either hand, Mr Nichols told Trinny: ‘Oh yeah, that, just a little mis-understanding when I says one of ‘is flowers was crooked.’