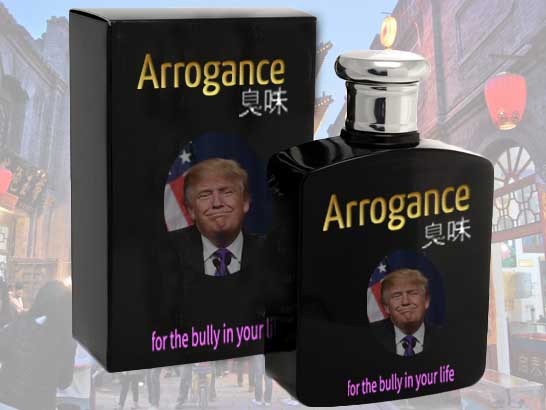 China has now granted approval for 38 new Trump trademarks, including a range of men’s perfumes to be sold under the brand name ‘Arrogance’.

Spoofflé today received this exclusive screen shot of the billboard and magazine advertising planned for ‘Arrogance’, which Trump executives are optimistic will lure Chinese men away from established brands such as Boss and Armani.

Mikhail Kalaterinov, Vice-president of Toiletries Marketing for Trump Inc, was enthusiastic about their new perfume. ‘Hey, this babe is gonna knock their little China socks off! It’s for the guy who, you know, sits above the rest of his fellow men. He’s wealthy, he’s smug, got fingers in a shit load of deals, makes his own rules and never needs to ask advice from anyone, especially experts. Know what I mean?’

Other proposed business activities include Trump-branded hotels, bodyguard services and a string of high-class Beijing massage parlours to be known as ‘Stormy’s’.