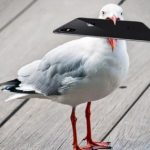 Holidaymakers at the sleepy Cornish town of Polperro watched in amazement on Friday afternoon as a seagull snatched a man’s mobile phone in its beak and flew off round the cliffs.

Graham Crimble (39), a plasterer from Oldham, was eating an ice cream with his wife and eight children when the bird struck. “It was a bleedin’ monster, like something out of the movies,” he told Spoofflé. “But I’ll give him his due, he knew what he was doing, he had to pick a brand new iPhone X with 64gb didn’t he?”

But although the family returned home, the tale didn’t end there. Mr Crimble called us with the news that around 7.30 this morning, a DPD van delivered a large box which to their amazement contained 120 Cornish pasties, supplied by PastiesByPost. Spookily, the invoice showed the order had been placed 30 minutes after his phone had been stolen.