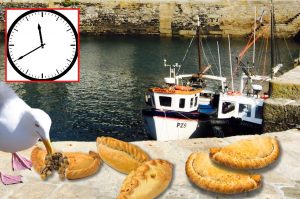 In a week when Cornish pasty makers were once again defending their most famous pie against Devonshire imposters, a Dutch holidaymaker has captured strong evidence that gulls can actually tell the difference.

Gerritt de Groot was in Penzance enjoying an ice cream with his children when he noticed that a gull had left a discarded pasty, with its pastry crimped along the top, completely untouched.

“I was being kind of intrigue by this funny thing,” he said. “So we are doing a sort of experimenting, you know?” Gerritt, a senior lecturer at Voodstraatten Institute of Learning,  bought pasties from the local grocer, some with seams along the side – in the traditional Cornish style – and others with a top seam, usually known as ‘Devon pasties’. 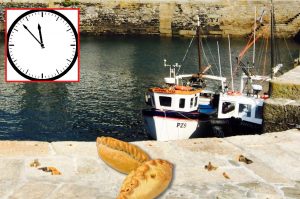 “It was being quite fantastical, what we are seeing is happening,” said Gerritt. “It is taking not more than ten minutes when the gull he is eating only the pasties that the Cornwall people are calling the ‘Cornish pasties’.”

Spoofflé’s Cookery editor Stefanie Baker was not surprised by the evidence. “Oh we’ve know about this for years,” said Stefanie, a native of Cornwall. “Not only do pasties from Devon have their seam in the wrong place, I believe they’re filled with rabbit guts, crushed crow’s beaks and possibly worms. I wouldn’t be seen dead with one.”