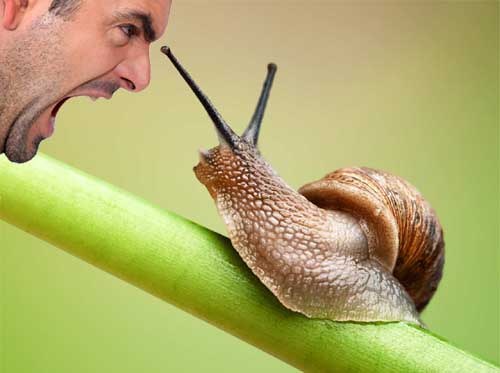 Snails are the salad gardener’s worst enemy but a recent study has shown for the first time that the creatures have acute hearing and are highly sensitive to the human voice and intoned emotion.

Marcus de Frenais, a post-graduate researcher at the University of Macclesfield, placed two groups of 68 common snails (Cornu aspersum) along the edge of a large lettuce patch. He then shouted foul abuse at a distance of 0.3 metres to one group and later whispered softly to the other group, at the same distance.

“The reaction was incredible,” he said. “Within a minute of me starting shouting, over 90% of the first group had started frothing their defensive mucus and all but three immediately left the patch without touching the leaves.” He admitted that he may have screamed ‘get off my lettuces you slimy, disgusting, greedy little vermin!’

To the other group, the researcher heaped gushing praise on their stunning appearance and invited them to eat as much as they liked.

“I could tell they were really relaxed and I even told a few of them I loved them,” he said. “Most of them set about the lettuces like there was no tomorrow but seven of them ignored the feast altogether and started climbing up my trousers.”