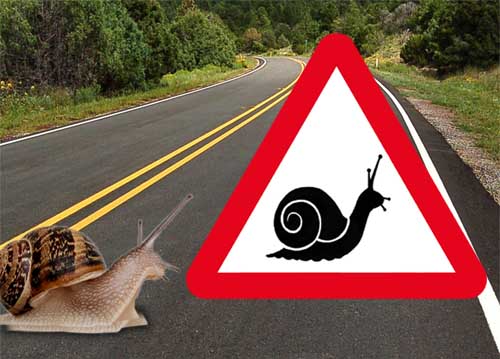 Snails will soon to be able to make their hazardous crossing of Britain’s busiest main roads with slightly lower risk, thanks to a new roadside warning sign.

The creatures will be shown within a red warning triangle, a roadsign already widely used to protect deer, sheep and most recently, hamsters.

The Royal Society for the Protection of Gastropods (RSPG) estimate that 10-12 million snails are brutally crushed on our roads every year.

More worryingly, the total snail population of the UK has fallen from over 600 million to 300 million since 2012. We asked Dr Max Groenig, head of advanced statistics at the University of Wigan, to interpret these figures.

“Our team carried out extensive Fourier transform analysis over three weeks on the snail data and our findings are that the population has fallen by a half.”

Not everyone however, is pleased with the new sign. Arthur Jackson, 67, secretary of Little Dingley Allotment Society, was fined £75 plus costs last week for defacing several snail warning signs on the A26 Tonbridge road.

“It’s bloody daft,” he said. “The A26 is the only thing that keeps the buggers off my lettuces.”