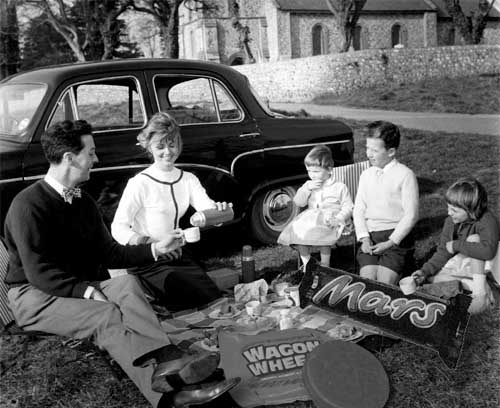 For years, Ipswich plumber Arnie Fawcett, 64, has been complaining to his grandchildren how much larger their favourite chocolate biscuits were when he was a lad.

But none of them believed him. Until last Friday.

While clearing out his loft, Mr Fawcett stumbled on an old photo album which included a snap taken on a family picnic in 1971.

“I was absolutely gob smacked,” he told our reporter, “I mean it’s obvious they keep cutting the size while putting up the price but until I saw that old piccie, I hadn’t realised quite how big they used to be.”

As a boy, he recalls setting off for school with a packed lunch in his satchel. “A Wagon Wheel wouldn’t fit in my bag so I used to strap it to the handlebars with a rope.

“And the Mars Bar, well there was no way I could carry the thing so my Dad used to saw it into five pieces on a Sunday night and I’d take one of them each day.”