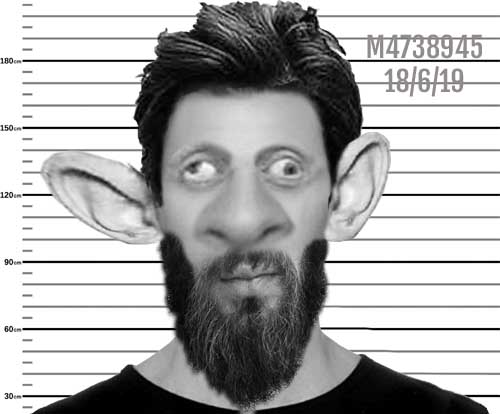 Kent police have started trials of a system that could revolutionise the way crime suspects are identified, using no more than than a single hair.

The ‘Villain-e’ database developed by the University of Margate has been loaded with more than 1.3 million images and DNA samples of convicted criminals, supplied by security authorities around the world.

The system’s sequencer (a Sentek model 4375) uses advanced DNA phenotyping to predict the detailed profile of a suspect, including their gender, ethnicity, physical features and even their likely voice pattern and IQ.

Detective Inspector Andy Carter is leading the trial and, despite early setbacks, remains optimistic of eventual success. “Obviously there’s been a few teething troubles,” he said, “I mean, the first photo it came up with (as illustrated) caused a bit of a laugh down the station but anyway, we put up 15,000 posters across Kent but nobody had seen him. Nasty case that was,” he added. “Someone had been nicking undies off washing lines and replacing them with pages from a Fanny Farmer cook book.”

However, Kent Police finally had a breakthrough when a postman spotted the culprit in the act. We asked DI Carter how well the man they arrested matched the photo produced by the system

“Not too bad,” he said. “Apart from the fact it was an 93 year old woman with silver hair. But it did get the beard right.”