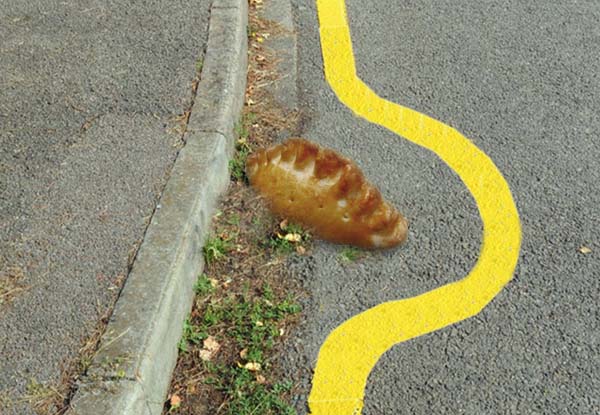 A reader from Taunton in Somerset emailed this photo, taken in the road outside his bungalow. Graham Biggelow and his wife were unloading their weekly Asda shopping and didn’t notice the pasty he’d bought for lunch fall from a bag.

“It was a good half hour later when my Pam she says to me, she says ‘Gray – where’s your pasty’ and I was blowed if we could find the little devil.”

When Mr Biggelow checked the road where he had parked to unload he discovered that not only was his pasty lying undamaged in the gutter but council workers had been along a few minutes earlier and painted a fresh, yellow parking restriction line neatly around it.

“What nonkers they are,” he said. “And by then the damn thing was so cold Pam had to microwave it for me.”