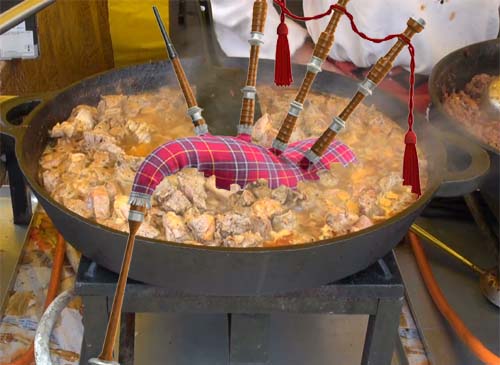 Hamish McBraine has vowed never to return to the idyllic Ionian island of Snafios after his honeymoon was ruined by a drunken Greek chef.

The 28 year-old Glaswegian musician and amateur sporran restorer had parked his precious instrument in an alcove at a harbourside taverna while he and his wife settled down for a romantic dinner.

“After about an hour, I noticed an odd wee smell,” he told us. “It was a-coming from tha’ kitchen, a kinda’ smouldering wood and scorched wool.”

Hamish went to investigate and was horrified to discover his bagpipes, a treasured heirloom made by his great-great-great-grandfather Hamish, gently stewing in a pan of what the staff claimed was goat and octopus stifado.

Taverna owner Stavros Rodinoulis denies negligence and says that a new chef mistook the bagpipes for the octopus which local fishermen usually leave daily in that alcove.

He denied that the 17 year-old chef had been drinking heavily although did admit he had stopped the lad dancing with a statue earlier that evening.