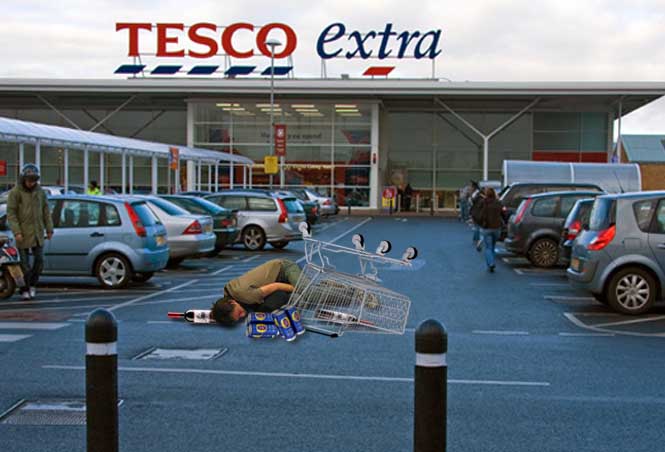 A major supermarket chain is trialling the use of trolleys to ram fleeing shoplifters.

Security staff at five Tesco stores have been trained by the Metropolitan Police ‘tactical contact’ unit who have been using a similar method with spectacular success in North London to knock suspects from their  scooters.

Marcus Trenton, head of security at the Tesco store in Balham, explained the technique to Spoofflé. ‘Theft is a very big problem for the company,’ he said. ‘Traditionally, if we spotted someone trying to carry out goods they hadn’t paid for our operative would only be able to gently ask them: ‘Excuse me, sir or madam, but I think two lobsters and a litre of vodka may have accidentally slipped into your overcoat pocket. Then they’d run away really fast.’

67 year old security officer Alan Peevish is in no doubt that the new approach is working. ‘It used to be bloody annoying when they legged it, ‘cos wiv my arthritis I could never catch the bleeders.’ Alan says that on a good day he stops nine out of ten shoplifters. ‘As soon as I sees them leave I grabs a trolley, I follows them out to the car park then I rams them in the calves. They don’t arf go down!’

We asked Mr Trenton if he was not worried about injuring people who, after all, are innocent of any crime at that moment. ‘It’s up to them isn’t it? They shouldn’t nick stuff should they?’

Spoofflé spoke to a group of lads standing near to the store, one of whom had first hand experience of the new, more aggressive action. ‘Aint worth the risk, is it?’ said a boy calling himself Kwang. ‘We used to fink they wouldn’t ram us if we ain’t got no baseball cap on but that ain’t true – they’re nutters they are, they knock us down even wiv no ‘at on.’