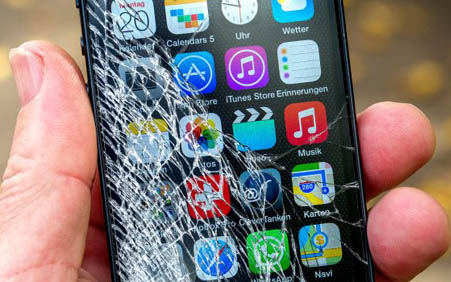 In a candid disclosure, the Prime Minister has revealed that she became so incensed with three of her ministers during a cabinet meeting that she took away their iPhones and smashed them against a table leg.

Recorded for this week’s BBC Panorama interview with Nick Robinson, Mrs May said that towards the end of June she had finally had enough of cabinet members abusing her rules on mobile device use. ‘Rules means rules,’ she said. ‘They all know, no playing with screens between 08.30 and 18.00. I even had them printed and stuck on the wall, so there really was no excuse. Boris was the worst offender, always arriving late without his sandwiches and then he’d slump over his phone playing ‘Ancient Rome II’ on full volume. Philip and Jeremy were almost as bad, passing the phone back and forth and sniggering to each other.’

Mrs May says she knows that she is still ‘a bloody difficult woman’ but on that particular morning she just ‘snapped’.

‘I said ‘right that’s it’, grabbed the three nearest phones and whacked them against the edge of the Queen Anne leg. And they all just stared at me with open mouths!’ She says it was probably the naughtiest thing she has done since running through a field of ripe wheat as a girl but says she has no regrets. ‘I am very clear about this. The phones went in the bin and they can collect them at the end of term, together with my collection of catapults, cycle clips, bubble gum and stink bombs. And those are just Boris’s.’

A senior figure who was present at the cabinet meeting says that the display of authority did the Prime Minister no harm at all. ‘I think it made them all sit up, actually. A few of them were crying.’