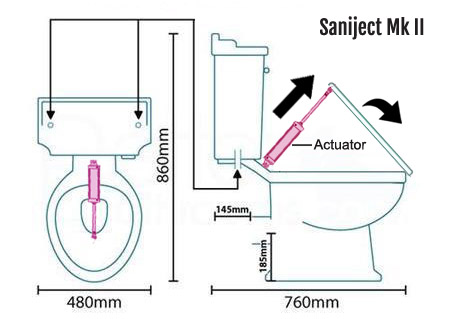 Now a small Staffordshire company has come up with the solution: a toilet whose seat automatically flips 45 degrees forward just two minutes after the user has sat down.

The Sanijet Mk 2 from Efficiency Ceramics Ltd has a built-in hydraulic actuator, whose piston rapidly elevates the rear of the seat and is claimed to be powerful enough to shift users weighing up to 110Kg.

One of the first UK customers was Barclays Bank whose General Manager Eleanor Fielding has installed 160 of the new toilets at their London HQ.

“The results have been incredible,” she told Spoofflé. “Before we put the Sanijets in, people would be sitting in their comfy little hideaways for an average of 38 minutes. But now they’re in and out in a flash.“

The Sanijet system includes a large digital countdown timer on the back of the closet door and an audio warning to vacate the seat ten seconds before the session ends.

Spoofflé’s technology correspondent Dr Crispin Grundwald asked Ms Fielding if there had been any teething troubles.

“Well last year the supplier put in half a dozen Mk 1 models as a trial but these were removed after only a week when the toilet launched a Regional Manager head first into the closet door, an injury that needed 23 stitches.”

An ex-employee of the manufacturer tells us that an error in the Mk 1 specification led to the hydraulic piston delivering a force of 15,000 Newtons instead of 15.