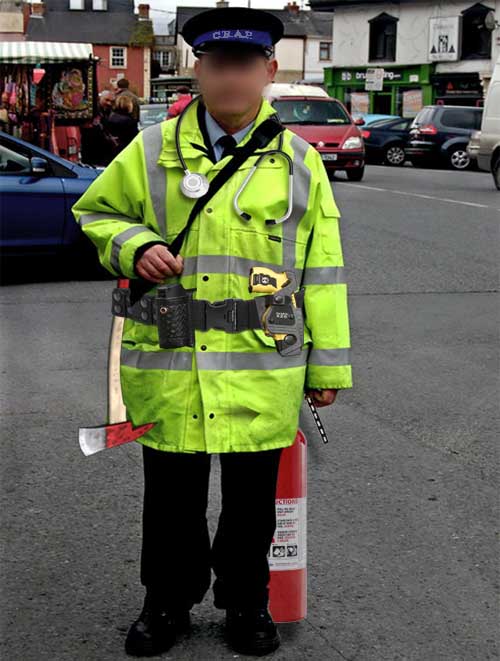 Rural areas of the UK will soon be served by a new team of multi-disciplinary Traffic Wardens. In addition to their normal duties, the highly trained cadre will respond to all 999 calls and are equipped to tackle emergencies such as fires, burglaries, heart attacks and delivering baby lambs via caesarian section.

The ‘Combined Response and Protect’ unit (C.R.A.P.) have been deployed initially throughout North Wales and Western Cornwall.

Senior C.R.A.P. Officer Owen Owens, 57, from Trawsfynydd explained how proud he was to have been selected after 32 years spent punishing motorists. ‘I were over the moon I were,’ he said. ‘My mam would be so proud of me, she would.’

Asked about the eight days of training he had received, Mr Owens said: ‘Oh it were exhausting. We had a couple of heavy days learning the Law and having Taser practice which was fun, another whole day fighting fires like and then another blooming week on the new red parking ticket procedures. But I’m ready for anything now. Oh yes.’

This morning we spoke to Mrs Angela Stopes, a bee farmer from Ruthernbridge in mid-Cornwall, who recently encountered a member of the new force and was less than impressed.‘Well, he arrived on his scooter pretty fast,’ she said, after her car overheated and caught fire while parked on double yellow lines and her husband had collapsed in panic.

‘He spent half an hour looking through a blooming great ring binder before writing us a 50 quid parking ticket. Then he put the fire out and finally asked: “So what’s up with your old man then?” He was useless.’