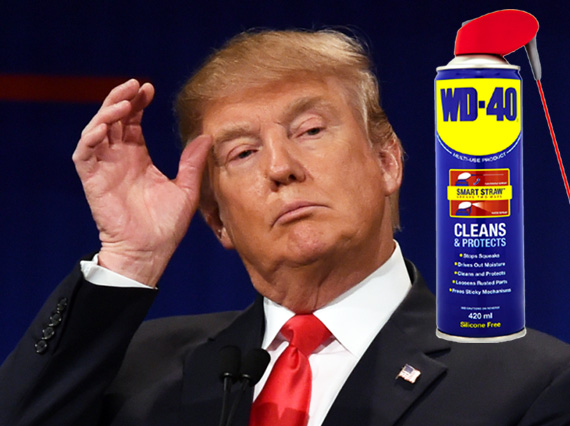 The famous WD-40 lubricant received Donald Trump’s seal of approval last night when the president revealed that he has been using the product several times a day to fend off the coronavirus.

During an ill-tempered roundtable event at the White House, Mr Trump was repeatedly asked by a Swedish reporter why his administration had failed to come up with any preventative drugs.

He added: “I’m gargling with it, WD-40. Right now, yeah. Couple of weeks ago, I started spraying at night then rubbing it into my nose area, round the nose, in it, on top of it, everywhere. Cause I think it’s good, I’ve heard a lot of good stories, one in particular from a car mechanic in Wyoming by the name of Chuck who said he’s been using it for years, many years. He’s not with us any more sadly, very sad.”

A representative from WD-40 later told us: “WD-40 should never, ever be taken internally nor should it come near to the eyes, nose, mouth or ears. Or near any orifice actually.” She went on to describe the dangerous side-effects of ingesting WD-40.

“These can include extreme cognitive impairment, delusions of grandeur, public displays of paranoia and, in extreme cases, facial skin turning orange.”