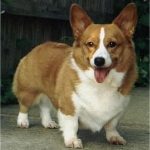 Reports have emerged that Donald Trump’s recent meeting with the Queen was not as uneventful as we were led to believe.

A source close to the Royal household has told Spoofflé that as the President attempted to kiss Her Majesty, one of her Corgis leapt to her defence and ‘took a lump out of his ankle.’

In the chaos which followed, our source says that Her Majesty remained calm throughout and called for someone to ‘please take her out’ whereupon a Secret Service agent pulled out an automatic pistol and shot the dog.

The meeting apparently ended immediately, although Mr Trump has since claimed that they ‘chatted for an hour, maybe more, and that they had great chemistry folks, fantastic chemistry.’