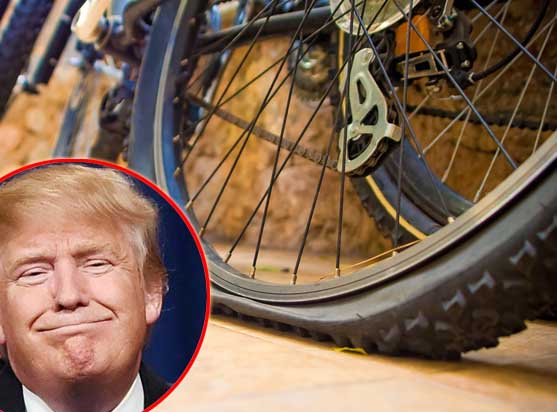 In a leaked memo uncovered by Spoofflé’s Washington correspondent, Donald Trump reveals the depths to which his relationship with British Ambassador Sir Kim Darroch had descended in recent days.

In an increasingly hostile tone, the leader of the free world emailed Federal agent Chuck Hergensteiner to ‘take down’ the ambassador, a keen cyclist, in retaliation for his less than flattering comments on the Trump administration.

“Maybe FIX his bike, like you know, stick a NALE or something SHARP in his TIRES!’

The revelation comes as no surprise to White House security staff who report that, during a meeting with British Prime Minister Theresa May, the president boasted that he stuck chewing gum under the cabinet conference table at Number 10 and scrawled the word ‘SAD losers!’ on the back of the toilet door.