Home
|
Life/Environment
|
Uproar as cats are admitted to Crufts 2019 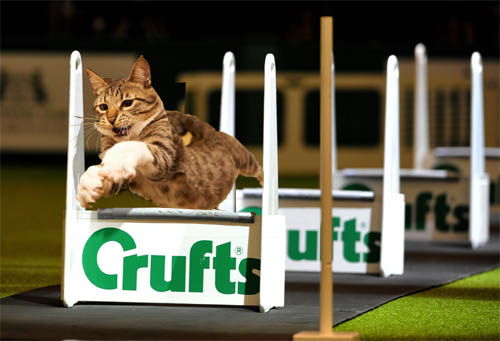 The canine breeding world was in turmoil this morning as Crufts ruled that cats who self-identify as dogs will after all be allowed to compete in 2019. The decision is a victory for Gwendoline Baker, a 34 year old scaffolder from Newport Pagnell and her rescue tabby Norman.

‘I always knew Norman was really a dog,’ she told Spoofflé. ‘When we first got him we was really worried, he weren’t interested in climbing up the curtains, he never pissed on the sofa which they’re meant to aren’t they and when I give him some fish, he just spat it out.’

Ms Baker had her original application to Crufts turned down but has persevered. ‘It’s not right, is it? I mean, he can’t help it can he? He knows what he is and I thought how nice it would be to like, celebrate his change by competing against other dogs, just like him.’

Spoofflé tracked down one of last year’s finalists, Penelope Landar-Smythe whose Moroccan poodle Frinton Magnificent Lady IV took second place in Best of Breed. ‘It’s absolute madness,’ she said. ‘She brought that thing to this year’s show and when it came into the grooming room, all these big butch dogs took fright. I mean, it must be so embarrassing for them, right in the middle of having their coats talcum powdered a cat walks in!’

Ms Landar-Smythe says that she did challenge the owner. ‘Yes, of course I did! In fact, when she kept insisting that her cat had become a dog, I told it to sit and put a juicy marrow bone in front of it. The thing just licked a paw, gave me a dirty look and slunk off. It’s a cat, a bloody cat!’

A Crufts’ spokeswoman later sent Spoofflé a statement which reads: ‘Crufts is proud to embrace the growing prominence of non-binary status animals such as Norman and welcomes entries from any creature which self-identifies as an alternative species.’