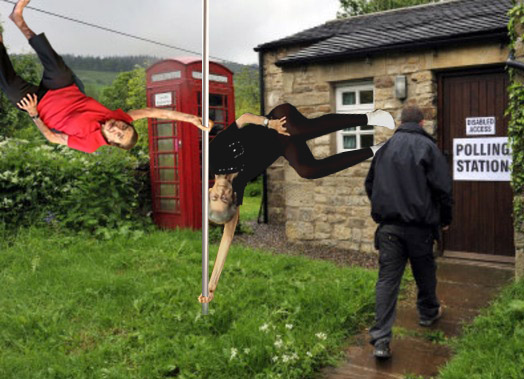 Ladies of the tiny Shropshire village of Button-under-Ware have been wrestling with the threat of low voter turnout in tomorrow’s general election.

But in September Madge Edgington came up with the bright idea of her WI ladies performing poll dancing routines throughout the day. Madge (92), a former line dancer at the London Palladium in the 1950s, explained their plan.

“Well, we’ve always done cakes and a cuppa at the polling station,” she said, “but people need a bit more than that these days, you know, to get out of the house on a stinky night.”

The WI ladies will perform in pairs from 7am until 10pm, using a poll supplied by local builder Gary Trellis. He told our political correspondent Dominic Wigge about the preparations.

“It’s a standard 43mm poll but I’ve glued a few patches of Velcro ‘ere and there to stop the girls slipping down if it’s wet.”

Dominic asked the small group of women assembled for rehearsal if they were apprehensive, since most had evidently never seen or heard of poll dancing.

Miriam Roberts, a spritely 97 with pink-streaked hair, admitted to her ignorance of the activity. “It is poll dancing isn’t it?” she asked. “Isn’t that where it comes from?”