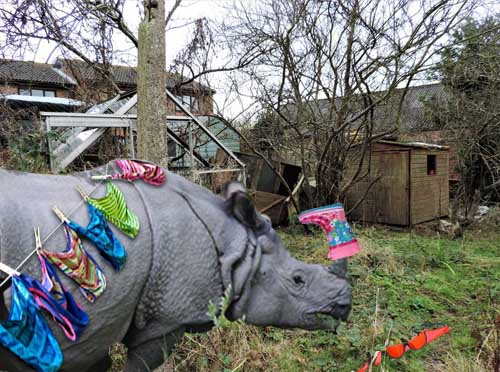 Essex pensioner Archie Hamble is celebrating this morning after Basildon Council granted him permission to keep Karen, a 4 ton Javan rhinoceros, in the back garden of his semi-detached bungalow.

Neighbours have complained that the animal is allowed to roam free, smashing through fencing and washing lines and destroying property, including flattening a 1998 Ford Fiesta 1.1 parked in a driveway.

Mr Hamble rescued the creature, an endangered species, from a bankrupt Latvian zoo while on a motoring holiday. “It was just a wee babe, back then,” he said. “She fitted in the back of the van.”

Karen is not the only exotic animal living in his 32 foot garden. “It’s formally classed as a wildlife park,” he said, bottle-feeding the three giraffes born in his greenhouse last week.

During her visit, our reporter also spotted an impala, three orangutans and a 14 foot python.

The planning committee has however imposed a restriction on keeping the rhino: Karen must be on a lead at all times. “It’s bloody daft,” said Mr Hamble. “Karen goes wherever Karen wants.”