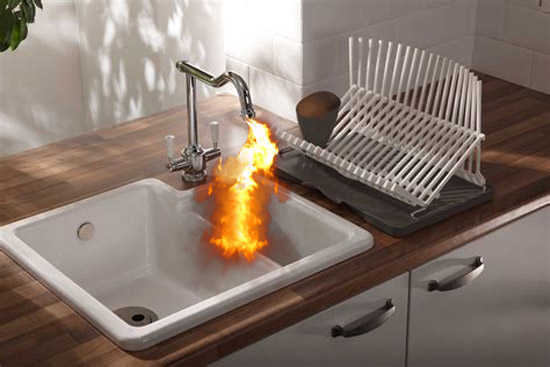 Residents of the tiny Lancashire village of Mythop were alarmed when gas began flowing from their cold water taps following a minor eartquake at 8.45 this morning.

Edith Postlethwaite was brushing her false teeth when the water started bubbling. ‘Eee, the pong were right mingin’ it were,’ she said. ‘I’d just done top set when water stopped and tap started hissing.’ The retired postmistress, however, didn’t panic. ‘I called our Jack to come in’t yard. He took one sniff and said “That’s that snail gas that is lass, fetch a match and yonder kettle and we’ll mek a brew.”

Other residents were also quick to capitalise on the free gas. Arnold Barton, a retired plumber, jammed a hosepipe onto his kitchen tap and had filled 17 party balloons and his hot water bottle before the flow stopped. Not so fortunate was local carpenter Fred Dibble, relaxing in the bath, who lost both eyebrows and most of his remaining hair when he lit his pipe.

The American energy giant Quintilla later denied all responsibility for the incidents. Their UK General Manager Jake R. Thunderbilt III told Spoofflé by telephone: ‘Quintilla is 120% committed to the ethical, economical and socially responsible extraction of shale gas from the rocks below this beautiful part of Great England. Our drilling experts assure me that shale gas leakage into the water table is totally and absolutely impossible.’