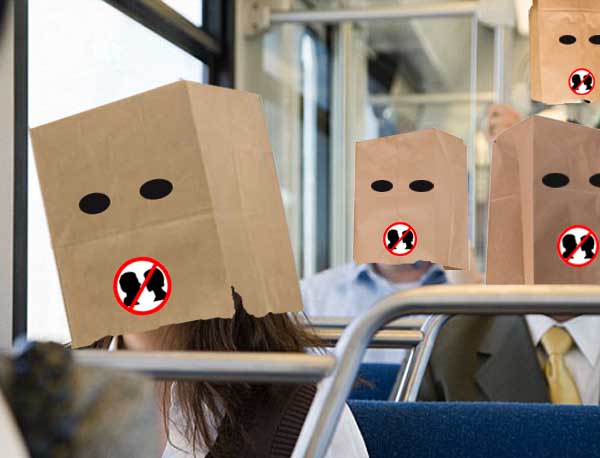 Commuters on Virgin’s London to Manchester rail service are being offered free ‘privacy bags’ to deter complete strangers from striking up unwanted conversations.

This follows last week’s BBC survey revealing that certain travellers actually welcome unsolicited gossip with total strangers. Some train companies even provide ‘conversation starter’ cards for people to place on their table which offer enticing personal tidbits such as ‘I don’t know what to do about my Athlete’s Foot’ and ‘I collect First World war underwear’.

However, angry commuters appear to want no part of such familiarity and Virgin were quick to introduce this typically British solution

Account executive Tasha Lipton, 29, sounded impressed: “They do get a bit hot after an hour or so,” she said, “but it’s really worth it. I mean, who wants to listen to a fifty year-old spoon salesman called Bernard with garlic breath going on about his model train set for two and a half hours?”