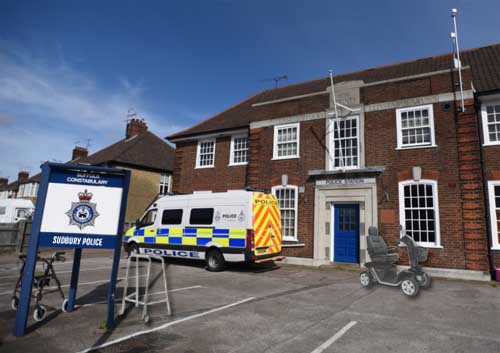 Suffolk Police have created a new voluntary detective role within their Special Constabulary in an effort to boost a rapidly declining workforce.

Superintendent Troy Malfoye described to Spoofflé the type of people they are seeking: ‘Ideally extremely nosey, self-motivated busy bodies aged between 75 and 95, with three or four hours a week with nothing better to do and a talent for sniffing out villains. If they can walk twenty yards unaided and use a magnifying glass then that’s a real bonus.’

We spoke to 92 year old Marjory Crowe who recently joined the unit and last month brought a murderer to justice. In 1973, the battered body of a local cleaning lady, Doris Figg, was found at The Old Vicarage in the sleepy hamlet of Huntley Snapton. Nobody was ever charged with the crime but after spending just twenty two minutes at the scene, Marjory had found the murderer.

‘It was easy peasy, really,’ she told us. ‘I just looked through some drawers and found what looked like it might have been the weapon and then confronted the owner with the evidence. When I said I thought he’d done it, he broke down and confessed, just like that.’

Superintendent Malfoye was full of praise for his star recruit. ‘Over the past forty six years we’ve taken 2,000 DNA samples, interviewed over 2,600 people and dug up countless bloody gardens, and all leading nowhere. And then Marj shows up and bingo. There’s a few red faces, I can tell you.’

Suffolk Police have confirmed that Rev. Archibald Philip Monton Green, 76, has been charged with the murder of Doris Figg and that a silver candlestick bearing traces of her blood and his fingerprints had been recovered from the library at the vicarage.