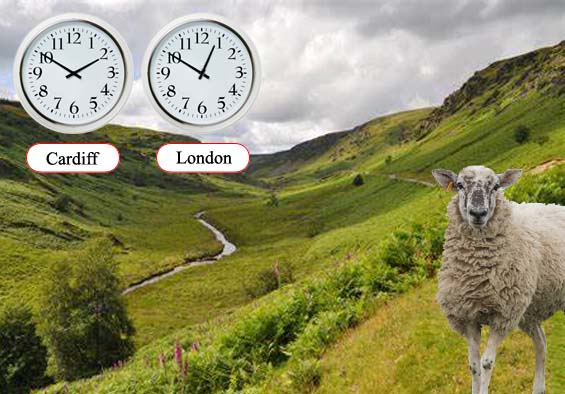 After years of fruitless lobbying and woolly excuses, sheep farmers in Wales have finally convinced their Assembly to introduce their nation’s own time zone.

On March 29th 2020, all Welsh clocks will move to Daylight Shearing Time (DST), exactly one hour later than British Summer Time (BST). This change will give hill farmers the additional time they need in order to safely complete their work.

Evan Evans, 47, a sheep farmer from Llanfihangel y Creuddyn near Aberystwyth told us: “Look you boy-o, it’s a really, really good thing, is this new time zone,” he said, “see, it gets dark so early in the valley that by the time we’ve caught the little buggers it’s too dark to shear ‘em without taking their ears off.”

We understand that in October, the Welsh clocks will revert to SVT (Standard Valley Time) which, for some reason that Evan Evans couldn’t explain, will be one hour and seventeen minutes later than GMT.