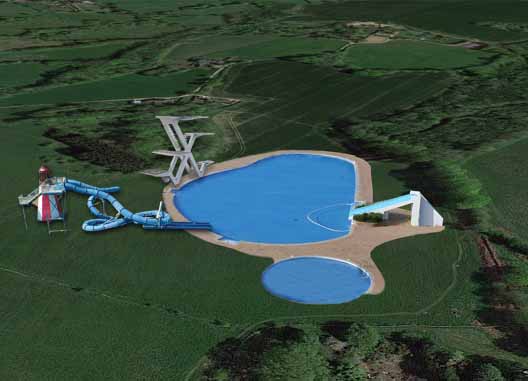 A multi-millionaire veteran rock star has run into trouble with neighbours who claim that his ‘wildlife pond’ is actually a resort-scale swimming pool.

Nearby residents were therefore shocked to discover that the blonde haired rocker – who once bit the head off a live prawn on stage – had actually built a vast swimming pool complex with theme park water slides and a three-level Olympic diving board.

A Spoofflé investigation has revealed that the original application was for a ‘100% natural water feature providing a habitat for wetland invertebrates such as dragonflies, crayfish and red marsh beetles as well as an important source of drinking water for birds and mammals.’

Documents filed by the council make clear that the pond should have ‘no other uses’, specifically forbidding ‘recreational leisure activities such as swimming or any other form of fun’.

A spokeswoman for the singer, who is currently on tour in Japan, told us:

‘Erik has kept absolutely 101% to the conditions in the planning permission.

The water feature offers a three story nesting platform for birds, a tubular water flume exercise ride for otters and, going forward, a number of six foot, sustainable bamboo rest beds and towel rails will be installed for larger mammals such as foxes and badgers.’