Home
|
Science/Technology
|
Your science questions answered: ‘Why are spiders leaving a mess on my front door?’ 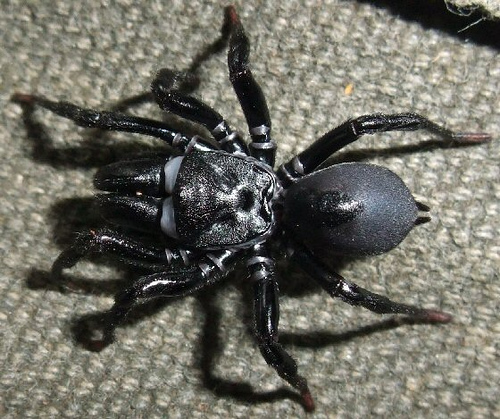 The science team at Spoofflé often receive technical queries from readers around the world, so we have decided to start publishing these for the benefit of our many thousands of followers, together with our explanations. Sort of an ‘Ask Spoofflé’ column that will appear from time to time.

Today’s email is from Adrian Stewbald, who lives in Crankerton-under-Wold, Shropshire.

A spider has taken up residence on my front door. Not content with weaving a web that catches me full in the face whenever I use the door (and I know it gets pissed off when I wreck the web with my face because they make a new one by the time I return) he or she is also making a mess down the door itself. How can something so small create so much of the stuff? Or is it fear from the spider’s victims that is causing the mess? Cheers, Adrian”

You are not the first person to remark on the unexpected presence of spider faeces in their webs. I hope I can spread some light on the phenomenon you have witnessed since it fits very closely with my own experiences.

Imagine my excitement one evening when, whilst watching a particularly aroused male dancing around a disinterested female (displaying extreme chleroptoma on its rear legs) I noticed faecal deposits arriving in direct proportion to his enthusiasm. I too became extremely excited (although not that excited) since this had never been witnessed before.