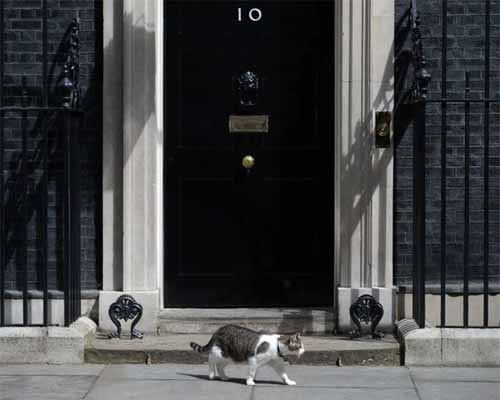 After a day of tense negotiations with Downing Street officials, Larry the cat has confirmed that he will, for the time being, return to No. 10. (See Spoofflé report from December 10th).

Larry has been given certain ‘assurances’ that the private ‘back flap’ to No 11, offered as part of his deal for allowing freedom of movement of other cats around the Downing Street building, ‘may’ have an end date. The 565 page agreement also now includes wording which says Downing Street ‘has an intention’ to allow Larry to buy his own luxuries including ‘Dreamies Extra Plus’ treats, smoked guinea pig and pickled pompano fillets, all directly from Peru, rather than through the normal Civil Service channels as other cats must continue to do.

Larry’s solicitor, Olwen Fabricant, told Spoofflé that the new deal, referred to as Peru +++, was probably as good as Larry was going to get. ‘He’s done pretty well, I mean, it’s all about trust. If we can’t trust the folk in Downing Street then who can we trust?’